What to do when you don’t know what to say 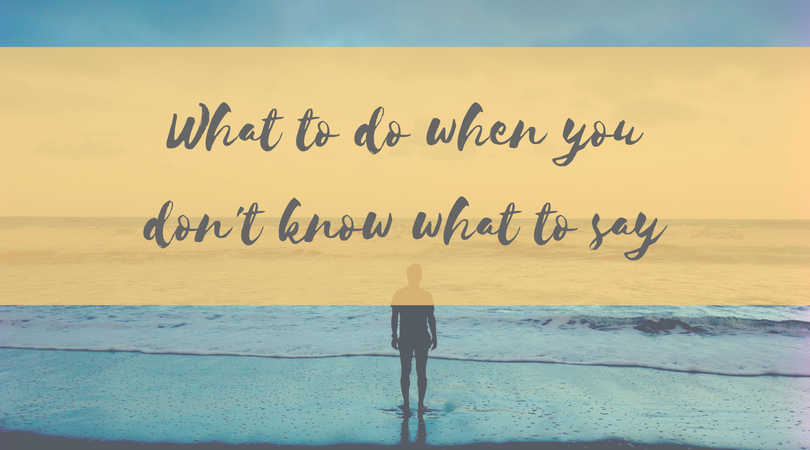 There are few words that accurately describe the gravity of emotions and feelings one experiences when grieving. There are physical and emotional effects that can throw a body into disarray. What few also account for is what grief does to the people around the bereaved.

Sheryl Sandberg, the COO of Facebook, abruptly lost her husband while on vacation a couple years ago. She wrote a book on being resilient after her loss, where she describes a lot of the same experiences that I, myself, experienced after loss in my life. Even someone so high up in a large company isn’t immune to what happens when we grieve. In an interview with ABC News, she discusses how an el ephant in the room emerged around her and people disappeared when she needed community the most.

From my own personal story to hearing from others in my life, this is a common problem. People become so scared to say anything for fear of making the bereaved upset that they don’t say anything at all and begin avoiding the individual altogether.

With few exceptions, there is nothing you can say that is going to make the grief worse. I promise. Honestly, sometimes you don’t need to say anything at all; presence alone can help the bereaved just to know they are not alone in that moment. There is a Jewish tradition called “Shiva”, which, from my understanding, is seven days of mourning were the community of the bereaved individual just is present with them to mourn with them and share the burden.

Don’t ask the bereaved to contact you if they need anything. They won’t. In my case, my brain was so consumed with grief I probably wouldn’t have even been in a place to take the time to think about what I actually needed in that moment. Additionally, many feel as if they have already been a burden by being so “needy” while grieving, and the thought of imposing on others more is something that will be avoided.

Be there when the dust settles. The weeks after a death, the loved ones will be covered in people, cards, flowers, and busyness. The months after that is when community is most important.  There will be more silence, that feeling of a return to “normalcy,” and there will still be many hard days where a meal or watching a movie with someone can make all the difference. Again, don’t be scared you are going to say the wrong thing.

There are a plethora of other things that can be suggested of what not to do with someone who is grieving, but I really wanted to put the emphasis on community today. I felt isolated when I was bereaved and even Sheryl Sandberg did, which means it happens to anyone, and it’s something we can all help change!